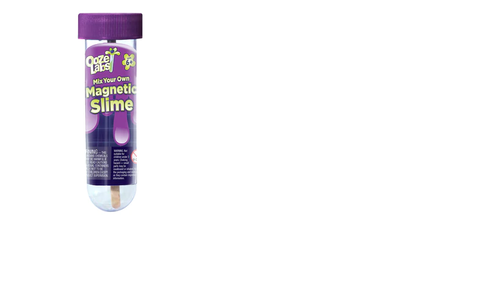 Mix your own slimes, sands, and crystals! Ten fun kinds to choose from! Magnetic Slime acts like a magnet, Hot Ice Crystals are crystals that really create heat, Magic Sand makes cool forms underwater but never gets wet, Hypercolor Slime is awesome colors, Glow-In-The-Dark Slime, well, glows in the dark, Sunshine Slime changes from white to pink-orange, Glitter Slime is blue with holographic glitter, Instant Snow mixes with water to create expanding fake snow, Glowing Galaxy Slime glows and glitters, and Quicksand Oozebleck teaches about non-Newtonian fluids, which act like a solid or liquid depending on how much force is acting on them. You can't go wrong with any of these! Made in Taiwan. Ages 6 and up. 0.1 pounds each.