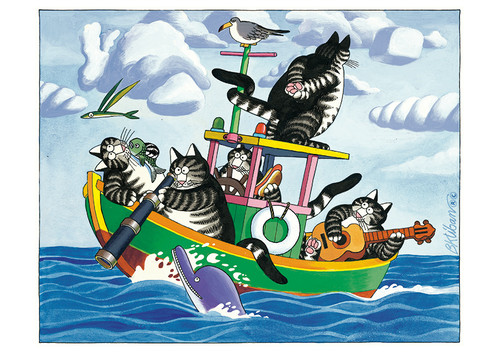 Twenty assorted 5 x 7 in. blank notecards (5 each of 4 designs) with envelopes in a decorative box.

The whimsical Cats of B. Kliban (American, 1935–1990) have held a cherished place in the hearts of fans since the publication of Cat in 1975. Inspired by the antics of his own cats, Kliban created Cat, a quirky kitty who embodies Kliban’s offbeat sense of humor. Cat lives in a world of absurd adventures that real cats can only dream about. Immensely popular, Cat images have appeared on everything from calendars to coloring cards to jigsaw puzzles the world over.

B. “Hap” Kliban attended Pratt Institute in New York but dropped out to become a beatnik painter in Europe. After returning to the United States, he established himself as one of America’s top cartoonists. He pioneered a new genre of adult humor, and his deft style and creativity continue to inspire cartoonists working today.

In this notecard collection, Kliban’s beloved Cats frolic in four scenarios, each with a humorous twist. Kliban’s gentle touch infuses his paintings with goofiness and glee, as felines give humans a fresh look at life.